Virginia’s state police expected an influx of money from the new state budget. Instead, they learned this summer that a shortfall would quash promised raises for all state employees and doom a separate effort to give experienced officers an additional pay boost.

“Many of our people have just kind of thrown their hands up and said, ‘Listen, I’ve got to do what I’ve got to do to take care of my family and if you’re not going to help me do it, then I’m going to go elsewhere,’ ” said Wayne Huggins, who heads the Virginia State Police Association.

“We perform roles that only the state police [can],” Huggins said.

Beyond salaries, continuously tight budgets across many states can take a toll on troopers’ morale. Outdated equipment, the disappearance of fringe benefits like cellphone allowances, and the demand for overtime work in exchange for comp days that they may not even have time to take have convinced many officers to head for the exits.

And attracting replacements is increasingly difficult as recruits favor the many municipal police departments that pay more than their state counterparts. The Virginia State Police, for instance, saw a nearly 50 percent decrease in applications between February and August, and only 31 percent of applicants actually showed up for testing.

Declining unemployment and rising police-community tensions could be partly to blame for fewer applicants, according to Nelson Lim, a sociologist who analyzes recruitment, retention, diversity and other police personnel issues for the RAND Corp., a nonprofit public policy think tank.

Even before this summer’s resignations, the Virginia State Police had gaping holes in its force. Over the last decade, the department’s budget has been reduced by $107 million, including a $13.1 million cut this year. The starting salary for a Virginia trooper is $36,207, which is several thousand dollars below the national average, Huggins said. Like many other state police departments, the force also has been depleted by a flood of baby-boom retirements.

Overall, the force is short 237 sworn officers, the equivalent of 11 percent of its 2,118 troopers, special agents and supervisors. It’s also short more than a hundred civilian employees, who are responsible for tasks that include manning 911 call centers and maintaining vehicles.

The story is similar in Maine, where state police decided low salaries were to blame for their staffing vacancies. They hope pay raises ranging from 12 to 18 percent will reverse the shortage.

In Pennsylvania, where the number of state police retirees is expected to balloon in the next few years, the department has struggled to get more money from the state because transportation advocates have previously argued that funds would be better spent on infrastructure.

In Georgia, troopers cannot get to thousands of crashes each year because of staffing shortages caused by low pay and recruitment struggles.

In Iowa, the trooper training academy hasn’t hosted a new class in two years, and state police are operating with 102 fewer officers than they had in 1998. State Patrol spokesman Sgt. Nathan Ludwig isn’t sure how much the $50,564 starting salary has to do with those staffing shortages, but he knows that a large number of retirements are, at least in part, to blame.

“We’re trying to replace the people who are retiring and it’s hard to do that,” Ludwig said.

In Washington state, retirements and resignations meant for years that more officers were leaving the force than recruits were joining it.

The issue came to a head in 2015, when 31 troopers quit, moving to other, higher-paying police agencies. Including the number of people who retired, 106 troopers left the force that year. The resignations created almost four times as many vacancies as the previous six years — combined.

Washington State Patrol had known for years that its salaries weren’t competitive. But a study requested by the Legislature and conducted last year found more than money was involved. Troopers also were dissatisfied with a management culture that left them feeling disconnected out on the road, said Travis Matheson, the agency’s recruiting director.

People who work in law enforcement don’t do it for the money, Matheson said. But it does make a difference. Morale is affected, he said, by the fact that troopers make less money than many of their counterparts in neighboring police and sheriff’s departments.

“They would work next to their counterparts in other organizations that were a lot smaller, with a lot less prestige, with a lot less training and lot of things that didn’t compare to us, but they were making a lot more money than we were,” Matheson said. 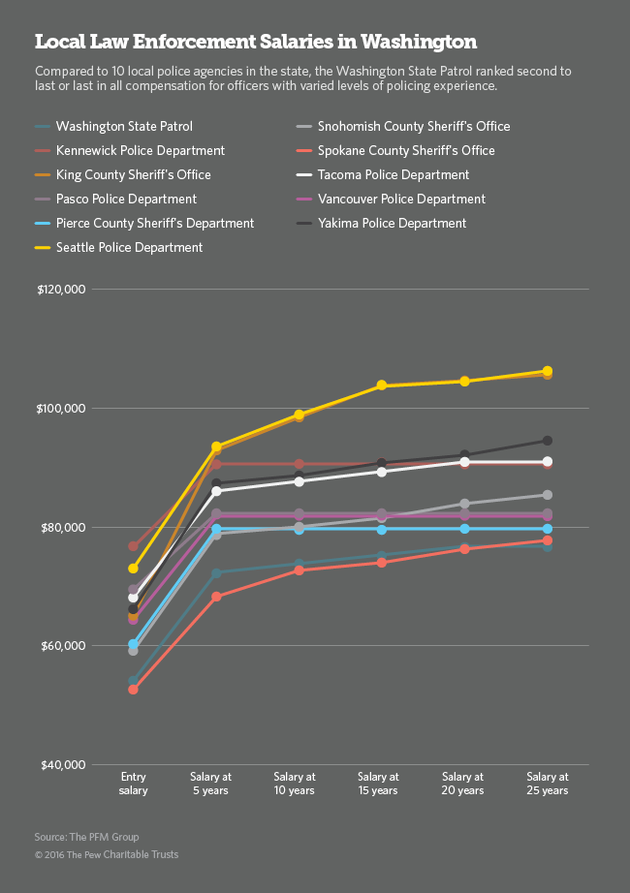 Washington State Patrol salaries fall below that of a number of local police agencies. For example, entry-level state troopers earn $54,192 a year — $22,509 less than their counterparts in Kennewick, who draw $76,701 in their first year of service at the southeast Washington police department.

The law that dictates the raises also requires the state patrol to invest in recruitment campaigns to attract people who are unlikely to show interest in joining the force, including those who live in low-income and minority neighborhoods.

Already, the department has used billboards to advertise. And it’s experimenting with testimonials from new troopers on social media and popular apps like Pandora, an internet radio station, to encourage people to sign up.

“They’re very young,” Matheson said of the troopers featured in the ads. “They look and sound young. They’re a diverse representation of the agency.”

A dedicated source of funding might be the solution in other states, said Huggins, the Virginia trooper representative.

He points to legislation offered by Virginia state Sen. Charles Carrico, a Republican and former state trooper who wants to create a dedicated revenue stream to support the state police by raising vehicle registration fees by $1.25 each year through 2026.

“We don’t need a Band-Aid,” Huggins said. “These problems have been persisting for years. They just have grown almost to a crisis point now. We need some long-term solutions.”

The blame for the staffing problems often goes beyond money.

Police departments need to speed up their hiring process, which can sometimes take up to a year, said Jon Walters, a former police officer from Washington who founded Public Safety Testing, a company that streamlines applications so candidates can apply to more than one agency at a time.

“The reality is that in the private sector, for even highly skilled positions, they [employers] can make a decision in weeks rather than months,” Walters said. “That’s what we’re competing against.”

Police agencies also should consider making it easier for recruits to join by easing up on the measures they use to evaluate potential officers, said Lim of the RAND Corp.

Forcing local and state recruits to take tests in which they have to decipher complicated legal terminology before they’ve even gone through training often rules out candidates who could be excellent law enforcement agents, he said. They just haven’t learned the material yet.

And while physical tests like jumping 6-foot fences and dragging human-sized dummies around demonstrate physical ability, officers may have to do those types of things only once or twice in an entire career, Lim said. So the tests aren’t consistent with everyday requirements of the job.

“Most of the time, these tests are homegrown tests,” Lim said. “They are not scientifically significantly validated.”