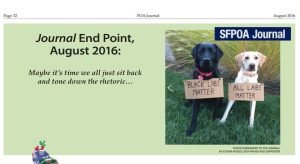 SAN FRANCISCO – A play on the phrase “Black Lives Matter” has some members of the San Francisco police department facing criticism. The controversy is over a photo published in the SFPD’s union newsletter.

It was sent by someone named Esther Woods who claims to be a union supporter. But the photo is doing anything but bringing levity. Already there are people saying this photo is insensitive to the Black Lives Matter movement, where supporters feel the black community is disproportionately profiled and killed by police.

The backlash even comes from within the department; the president of officers for justice, a group that represents black and other non-white officers told the San Francisco Chronicle that the photo shows a lack of understanding and is inflammatory.

The department is currently being reviewed by the Department of Justice, following the recent police shootings of several black men and women.